I thought I’d take a break from political posts to introduce my new housemates: Leo and Nira. They’ve been living here for a little over 3 weeks now, and came to me through PAWS. 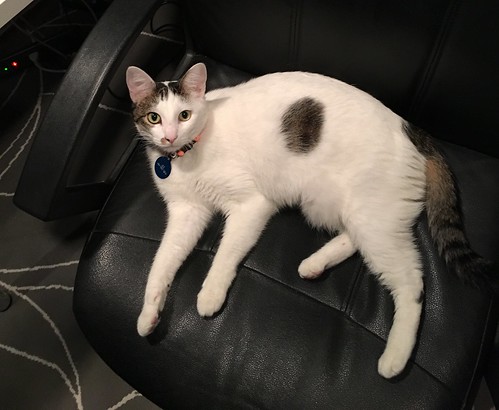 Leo is about 16 months old. He’s a cuddlebug who is a little needy, but very sweet. He’s also extremely athletic and really good at getting to places he shouldn’t. 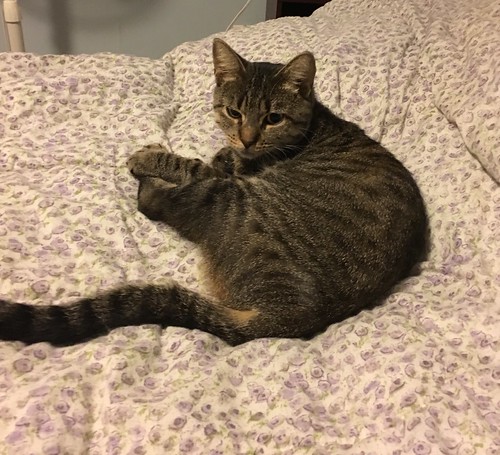 Nira is 14 months old. She’s a little shy, but very sweet. She’s been taking a while to adjust to me, but she and Leo have been getting along pretty well.

In my previous post, I mentioned that a Trump election might not affect me that much personally, but I’m starting to rethink that. For starters, while the majority of my family is Hindu, I do have some Muslim family members.

But the first report I’ve heard of hostility towards someone in my family actually came from my mom, a Hindu. She mentioned that when she’s out, people look at her with anger. She realized it’s because they think she’s a Muslim, so she now often wears tikka when she goes out.

I hope, for her safety, that it works. It’s been my experience that most people don’t know the difference between a Muslim, a Hindu, or a Sikh. They also don’t really care if you’re from India, Afghanistan, or anywhere else in the Middle East, the Indian Subcontinent, or even Latin America. Very simply, for a certain portion of the United States, all brown people look alike.

Of course, my Muslim family members don’t have the option of trying to wear some sort of protective marker.

In case you weren’t aware, Trump wants to force Muslims in the United States to register in a database. Trump talked about a Muslim registry during his campaign a year ago. While he backpedaled on that issue during his campaign, there are troubling signs that he may move forward with it after all. For one thing, the United States previously had a Muslim registry called NSEER, during the 2nd Bush administration. Some supporters of registering Muslims have even used the internment of the Japanese during World War* II as justification.

Then there are Jeff Sessions and Stephen Bannon, Trumps selections for Attorney General and Chief Strategist, respectively. Sessions has expressed anti-Muslim and anti-immigration sentiments before. He was also denied a position as a judge for making racist comments.

Bannon is a Neo-Nazi who has said that Silicon Valley has too many Asian (including Indian) CEOs† and is against letting foreign students who graduate from universities in the United States stay in the country.

If things look bleak, they are—and this is just the beginning.

*During World War II, the United States rounded up Japanese Americans (including the US-born children of immigrants) and relocated them to internment camps. Actor George Takei and Congressman Mike Honda have both talked about their experiences in these camps. I first learned about the Japanese internment camps in high school, after reading Farewell to Manzanar.

†Bannon claimed that two-thirds (67%) to three-quarters (75%) of tech CEOs are Asian (including South Asian), while the actual figure is closer to about 14%.

I know I haven’t posted here in a long, long while. Recent events, however, have given me things to think about and things I want to say.

First: Things are not going to be okay. I mean, I suspect that things will be more or less okay for me. While I’m still not white, an immigrant, and run the risk of being mistaken for muslim, I live in a little straight, middle class, model minority bubble. Things are going to be a lot worse for other people.

A friend mentioned that there are a lot of white women hand-wringing on Facebook about how they’re being blamed for Trump winning the election. There seems to be a lot of #NotAllWhiteWomen going around. But I think another group probably deserves a lot of blame: Indian Americans.*

By Indian Americans, I mean people like me. People who come from India or whose parents come from India, who are culturally or religiously Hindu, and who are eligible to vote in the US, either through birth or naturalization.

A lot of Indian Americans have voted for Trump, and even those who may not have been eligible to vote for him, supported him. A lot of this, I suspect, comes from deeply entrenched prejudices in the Hindu community against Muslims, Blacks, and Hispanics. Religious prejudice and racism are two of the most problematic aspects of Indian and Hindu culture, and they’re widespread. And just because Indian people aren’t white doesn’t mean they don’t have both in spades.

Now, obviously, #NotAllIndians are Trump supporters. I have no problem declaring that I voted for Clinton, but that doesn’t mean I’m without blame. I should have done more. I should have spoken up before we ended up with this travesty.

There probably aren’t enough Indian Americans who voted to have editorials written blaming them for Trumps victory. But this is still a democracy, and those who voted for Trump and those who didn’t vote at all still handed him the White House. And so did people like me who did vote, but didn’t do enough to explain why Trump is so dangerous.

Because it’s not Trump himself that concerns me most. I mean, I think his presidency will be an amazing disaster, but his supporters and the culture from which those supporters come from frightens me even more.

We now live in a country where it’s considered acceptable to tell non-white people to go back to where they came from, teenage girls are being sexually assaulted by their classmates because the president-elect has done it, and my part of the city has been vandalized with racist and nazi graffiti.

And on some level, it’s at least partly my fault. I should have done more. We all should have. So the question is, what do we do now?